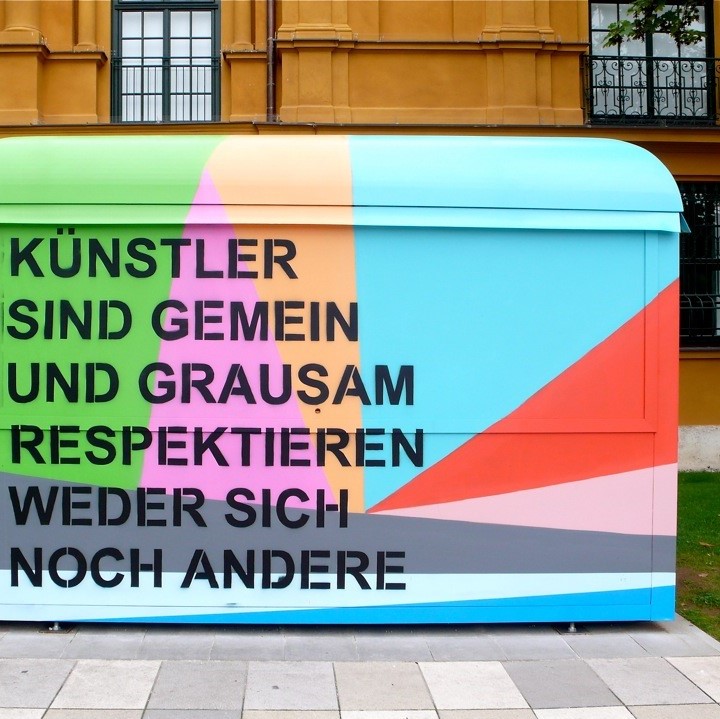 Man often says that his German and Chinese souls are locked in a conflict of cultures. The work of art is the surface upon which this dialog becomes illuminated. There, the elements that both cultures have in common – including the ways in which they compliment or contradict each other – can be joined into a whole: one overarching work of art. This creative conversation between artist and work of art is characterized by a remarkable dynamic that endures long after work has been completed.(…)His sense of when and how to react to varying conditions – particularly in public space – is indebted to the artist’s years of experience with graffiti. Both the vocabulary that he learned during this time, as well as the feeling fort he encounter between, artwork and its enviroment that he acquired, persist in his more recent work. It is the dialectical moment of an encounter that the artist is most interested in. Whether this is a confrontation between artist and work, a work of art and its enviroment, or colors, forms, materials and their effects – Man’s intuitions locate inherent tensions and render them visible. This ongoing interest is expressed in the artist’s most recent paintings and installations.
According to the dialectical principle of thesis and antithesis, he juxtaposes and superimposes different shapes, forms and structures in order to arrive at his dynamic compositions. A closer look at recent work makes it clear that Man regularly returns to the same basic elements. His three dimensional works deliberately integrate a component from previous work into new installative context, thus adding further consistency to his oeuvre.
Text: Anne Vieth